Visitation, which has won five consecutive 1A state titles, qualified 14 individuals and all three relay teams for Friday’s championship finals while Edina and Minnetonka shined in 2A. 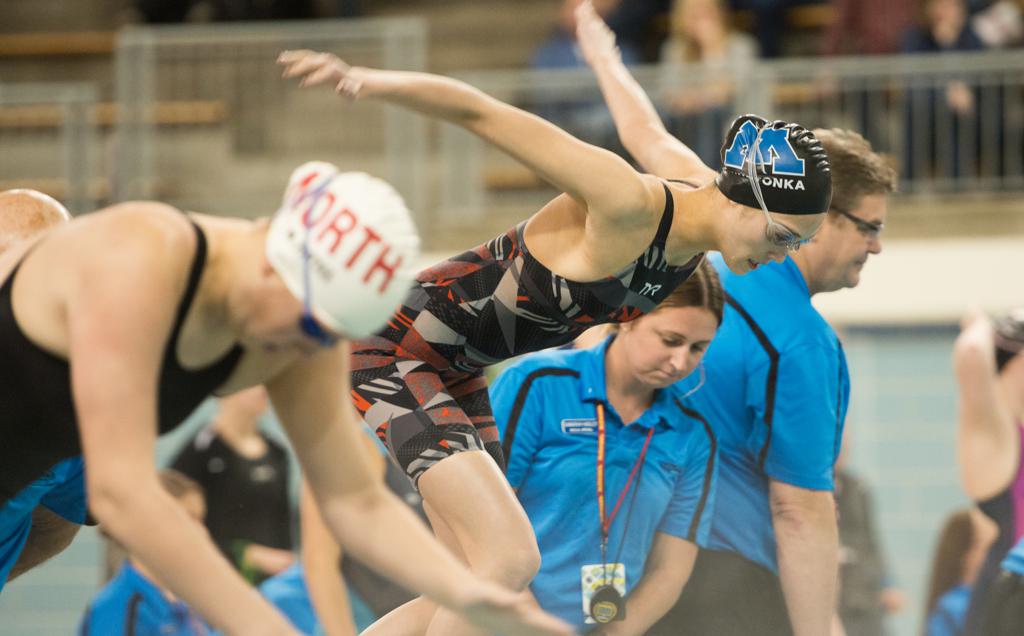 The Hutchinson and Visitation girls’ swimming and diving programs are familiar with each other.

Last season, the teams had a regular-season dual meet before they took the top two spots at the state meet. This September the teams competed against each other in a nine-team meet at Hutchinson.

“It’s good,” Hutchinson coach Rory Fairbanks said. “We can see where they’re at. We respect them. They’re a deep program and have nice kids. Our kids watch them and talk about them.”

On Thursday at the Jean K. Freeman Aquatic Center on the University of Minnesota campus, Visitation and Hutchinson dominated the Class 1A preliminaries.

“Our whole team did well,” Fairbanks said. “Every one held their [seed] time or better.”

Hanson, Mikayla Witte, Hailey Farrell and Kucera combined for a Class 1A record time of 3:28.49 in the 400 freestyle relay, breaking their own record of 3:29.03 set last year.

Kucera, a junior competing at her fourth state meet, also advanced to the championship finals in the 200 freestyle and the 100 freestyle.

“I’m pretty happy with today,” said Kucera, who won the 100 freestyle title last year. “I’m really excited about tomorrow. Our freshmen have had a big impact on our team, and everyone has played a big role in our success. “

Williams also swam the anchor leg on the Red Knights’ 200 freestyle and 400 freestyle relay teams, which both advanced.

The Hornets advanced 12 individuals and three relay teams to Friday’s championship finals. The Hornets had the top qualifying time in four events (Lily Gremmels in the 50 freestyle, Claudia Chang in the 200 freestyle and 200 and 400 freestyle relay teams).

The Skippers advanced seven individuals and three relays to the championship finals.

Edina advanced 10 and Minnetonka eight to the consolation finals.

Edina junior Megan Phillip, the two-time defending Class 2A state champion, had a score of 354.10 in the diving preliminaries on Wednesday. Last week, Phillip won the Class 2A Section 6 meet with a score of 520.40. The all-time state meet record is 507.0 by Wayzata’s Jaime Sanger in 1997.

In the Class 1A preliminaries, Big Lake senior Emi Quill had the top score of 272.90. Fridley senior Ellie Gunderson had the second-best score (272.45) while Breck senior Saylor Hawkins, the two-time defending Class 1A state champion, was third with a 271.35.