Swim records at Coon Rapids pool are a mother-daughter thing 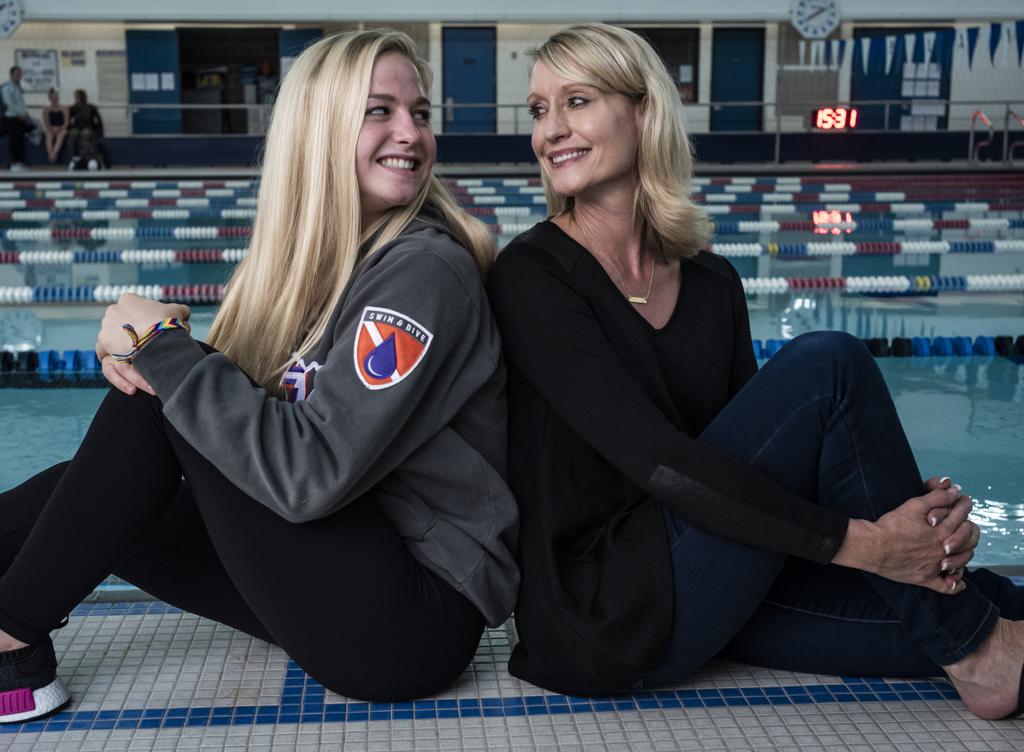 Andover sophomore Elsie Groebner, left, and Linda Groebner, her mother who swam for Coon Rapids, both have their names on nearby leaderboards. Photo: Richard Tsong-Taatarii • rtsong-taatarii@startribune.com

On the left board, which recognizes Coon Rapids program records, there’s a 200-yard medley relay team, including Linda Wallenhorst, whose time in 1985 still hasn’t been bested.

The right board belongs to pool record holders, notable considering the pool is a section meet destination. That’s where the 400 freestyle relay crew from Andover, including Elsie Groebner, set its mark in 2016.

“I’m super excited to tell people that my mom is up there and there’s my name, too,” said Elsie, a sophomore this season. “It’s fun to relate that way and be proud of what each of us has done.”

“A lot of people comment up in the stands, ‘How many times has that happened?’ ” Linda said.

Though a solid freestyle swimmer, Linda found her greatest success on the breaststroke leg of the 200 medley relay. She and Julie Keller, Natasha Amme and Debra Stevens touched out in 1 minute, 53.17 seconds.

“We were four really good friends and it was a little bit of magic,” said Linda, who helped the relay place fourth at the state meet.

Yet it remains the longest-standing Cardinals’ swimming record, for boys or girls.

“That time isn’t extremely fast these days but in 1985, it was a whole different game,” Elsie said. “That’s pretty impressive and I’ll give it to them for that.”

Like mom, Elsie swam the second leg of her record relay. Then an eighth-grader, Elsie teamed with Emily Pawlaski, Hannah Jones and Bella Smits and clocked a 3:31.06 mark to win the Class 2A, Section 7 race. The relay placed fifth at state.

“There was that feeling of, you finally made it,” Elsie said. “That record board is significant because this is where the fastest swimming happens in sections.”

Swim lessons started for Elsie about age 9, when her primary motivation was to defeat older brothers Andy and Ben. Around age 12, Elsie got serious with her sport.

“I decided I wanted to go to practice every single day and work hard to become maybe a state champion someday or a record holder,” said Elsie, who also trains with Great Wolf Swim Club.

Linda said: “We’ve always just gotten out of her way. She sets goals and does what it takes to get there. It’s pretty impressive how she took it to the next level pretty quick.”

Trying to beat mom’s times “was fun earlier … but now I have my own standards,” Elsie said.

Two years ago, competitive sparks began flying as Linda and two of her relay teammates watched their daughters swim in the Northwest Suburban Conference meet.

“We sat together up in the stands and kind of wanted to get down there in the water and defend our turf,” Linda said with a laugh.

Elsie appreciates both her mother’s compliments and critiques. And her goals are to reach the state meet in the 200 and 500 freestyle — she was second in both events in her section meet last fall.

Linda, who swam at St. Catherine University in St. Paul, said: “The fact that Elsie picked it up, stuck with it and is pretty fast is fun. It’s been a great ride.”