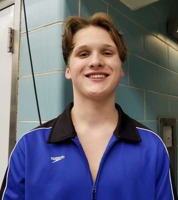 The defending Class 1A boys’ state swimming and diving champion Breck/Blake squad set a Class 1A record in the first event of the finals, the 200-yard medley relay, with a 1:33.60. That set the tone for winning its second consecutive team title.

Breck/Blake scored points in each swimming event, winning three, on the way to its fourth overall team title with 347 points at the boys’ swimming and diving state meet Saturday at Jean K. Freeman Aquatic Center at the University of Minnesota.

“No matter what sport you’re in, if you go back-to-back, that’s quite the feat,” said Breck/Blake coach Kris Rosenberg, whose teams also won in 2009 and 2010.

“Last year was a really emotional win,” Breazeale said. “We all knew we had the potential (this year).”

Winona finished second with 224 points and won the 200 and 400 free relays. It’s the school’s best team finish since placing second in the one-class state meet in 1956. Coach Chris Mayer came into the meet hoping for third place.

“I don’t even know if I have words to explain how ecstatic, emotionally happy I am,” Mayer said.

Not bad for someone diagnosed with mononucleosis in December.

“It did set me back a little bit, but I didn’t let it get me out of the water,” Wolner said.