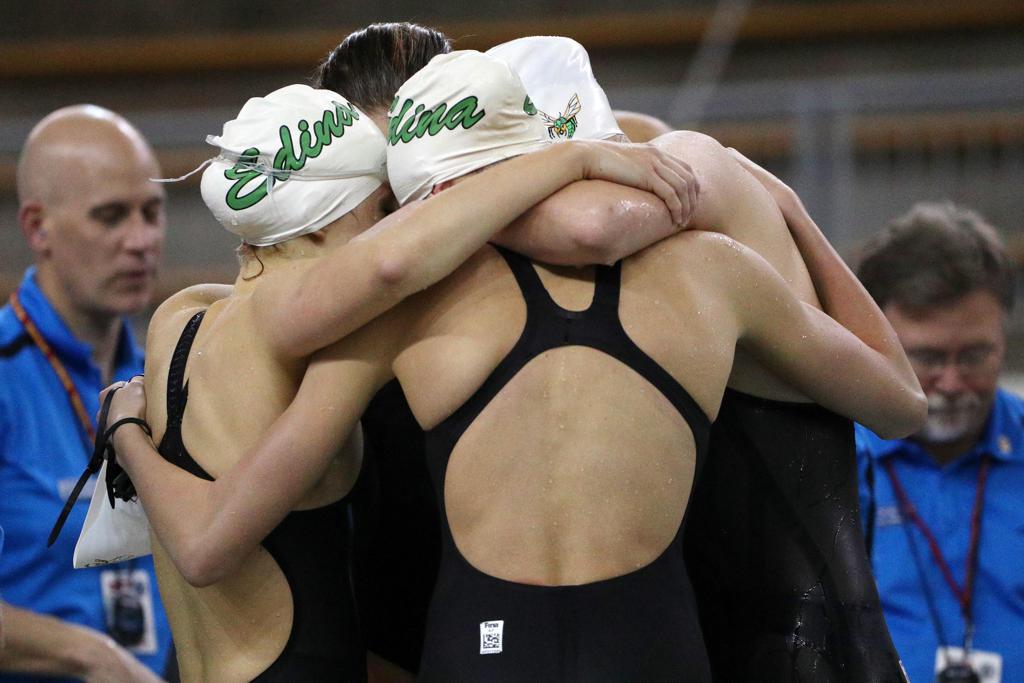 Edina made it back-to-back state titles with another dominant performance at the Class 2A state girls’ swimming and diving meet, outscoring the nearest opponent by more than 100 points.

The Hornets scored in 11 of 12 events and swam to four first-place finishes for their 15th state title Saturday at the University of Minnesota’s Jean K. Freeman Aquatic Center. The Hornets had 29 individuals advance from Section 6, and 14 advanced to the state finals, including two divers and all three relays.

It’s not the norm.

“Oh yeah, you don’t get that many entries every year,” Edina coach Jeff Mace said. “It’s a real fortunate year.”

Edina used that depth to score 382½ points — nearly 30 more than last year. Minnetonka was the runner-up with 281½ points, followed by Wayzata with 133.

Edina put an exclamation point on the meet with a third consecutive victory in the 400 freestyle relay (3:24.72). Post, McCarthy and Jones were on the record-setting team last year. Nora Clarkowski led off this year.

“Our 400 free relay, it’s kind of always been our favorite,” McCarthy said.

Added Jones: “It’s a tradition. That last one means so much to us.”

Edina sophomore Megan Phillip won her second consecutive diving title. She trailed Roseville senior Michelle Schlossmacher-Smith, the 2015 champion, after the semifinals by 13.15 points. Phillip made up the difference to beat Schlossmacher-Smith by 12.25 points, 476.05 to 463.80.

Blaine sophomore Isabelle Stadden set a Class 2A record and defended her title in the 200 individual medley with a 2:00.49. She also took the top spot in the 100 backstroke (52.78) after finishing second last year.

Emma Lezer of St. Michael-Albertville won back-to-back titles in the100 breaststroke with a 1:01.92. She also finished fourth in the 100 butterfly.

“I’ve definitely worked on my technique a lot,” Lezer said. “And it usually doesn’t come together until toward the end of the season, so I try not to worry about it too much during the season.”

The Blazers defeated Hutchinson by 6½ points for their fifth consecutive Class 1A title.

“We had enough swimmers throughout the meet who were able to accumulate points,” Visitation coach Nate Linscheid said.

Their 247½ points were enough to edge Hutchinson’s 241. Delano finished third with 183. Hutchinson held an early lead through four events, but Visitation divers Bella Mascia and Kapani Kirkland grabbed a total of 16 points to give the Mendota Heights school the team lead.

“Before diving, I think a lot of us were pretty nervous because we were behind,” junior Sophie Kishish said. “And then after diving, the girls really stepped it up.”

Kishish was one of three Visitation swimmers in the 500-yard freestyle, taking third place. She also took sixth in the 200 free and swam in the 200 and 400 free relays.

Hutchinson won four events. Eighth-grader Grace Hanson beat out defending champion Makayla Suominen of Cloquet-Esko-Carlton with a time of 23.22 seconds in the 50 free, which Hutchinson coach Rory Fairbanks called a “pretty big surprise.” Sophomore Lexi Kucera won the 100 free in 51.12 seconds after finishing runner-up last year. The Tigers also won the 200 and 400 free relays, with their 400 free relay team setting a Class 1A record of 3:29.03.

Earlier in the meet, Kucera finished second in the 200 free before she won the 100. “I’ve gotten touched-out a couple times, and honestly just to win it is a great feeling,” Kucera said.

Blake junior Madison Potter is 4-for-4 in state titles in the 200 individual medley and 100 butterfly. She repeated as champion in both events, beating her times from last year’s state meet. She swam a 2:03.76 in the 200 IM and 54.63 in the butterfly.