Chanhassen family all involved with Storm swimming and diving

All seven members of the Hodgins family are involved with the Storm’s swim teams. 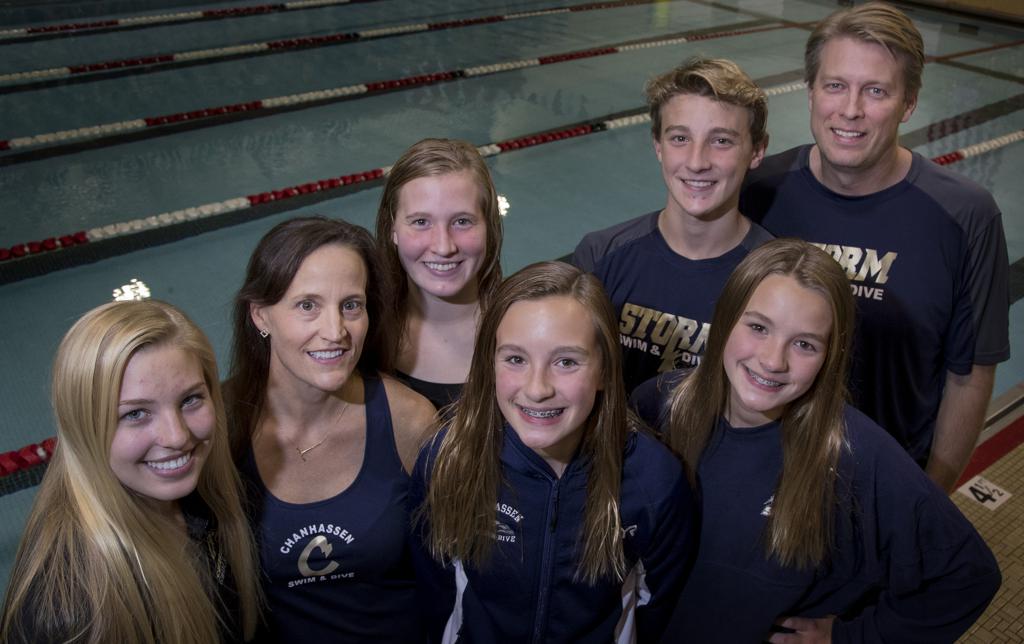 Swimming and diving were passions for Tamara and Brad Hodgins growing up, with each competing in the sport through college.

They’ve instilled that passion in their five children, all of whom compete at the high school level.

The arrangement means plenty of time at the pool for the kids and even mom and dad. Tamara coaches Chanhassen’s divers, while Brad runs the scoreboard at home meets.

No one appears to mind too much, however.

“It’s great seeing [the kids] active and busy,” Tamara said, “It’s worth it to see the kids succeed, knowing that it’s from all the hard work they put in.”

The family has been involved in swim teams for years, starting when Rowan, Maia and Reese joined a club team about 10 years ago.

Rowan made Chanhassen’s varsity team as a freshman and had an immediate impact, helping the team win a state title and set a state record in the 400-yard freestyle relay.

“The adrenaline of the meet and swimming with the fastest girls in the state was an amazing experience,” she said.

Swimming ran in Brad and Tamara’s families when they were growing up. Each had siblings who participated in the sport; Tamara’s brothers earned All-America honors in high school and later played Division I water polo.

Brad and Tamara met through the swimming and diving team at the University of South Dakota, where each was named an All-America multiple times. Brad, a swimmer, won eight conference championships, while Tamara, a diver, finished as high as fourth at the NCAA Division II championships.

Tamara also played lacrosse growing up and has started coaching the sport at the club and high school level in recent years. All five kids also play lacrosse, and Rowan is a two-time captain of Chanhassen’s varsity team.

The kids appear split on which sport they prefer. Reese said he would rather follow Rowan’s path and swim in college, while Maia, Siri and Leah said they’d rather play lacrosse. They agree on it being fun to have their mom as a coach. “She’s always there and ready to help,” Leah said.

Tamara said it’s the ultimate dream to coach her kids. People ask her a lot if it’s hard, but the family separates the roles well, she said.

Heidi Miler, coach of the West Express Swim Team, said Brad and Tamara have always allowed the club coaches to do their jobs and have embraced the goals of long-term development and their kids’ enjoyment of the sport. “They understand the intricacies and that it’s a long-term process,” she said.

Miler said the Hodgins kids always have understood that natural ability only will take them so far, praising their work ethic.

Miler said she’s excited Rowan’s going to swim in college and added that Reese might, too.

For now, however, the family appears intent on enjoying the current season.

“Instead of sports taking time away from the family, swimming is a sport where we can be together,” Tamara said.