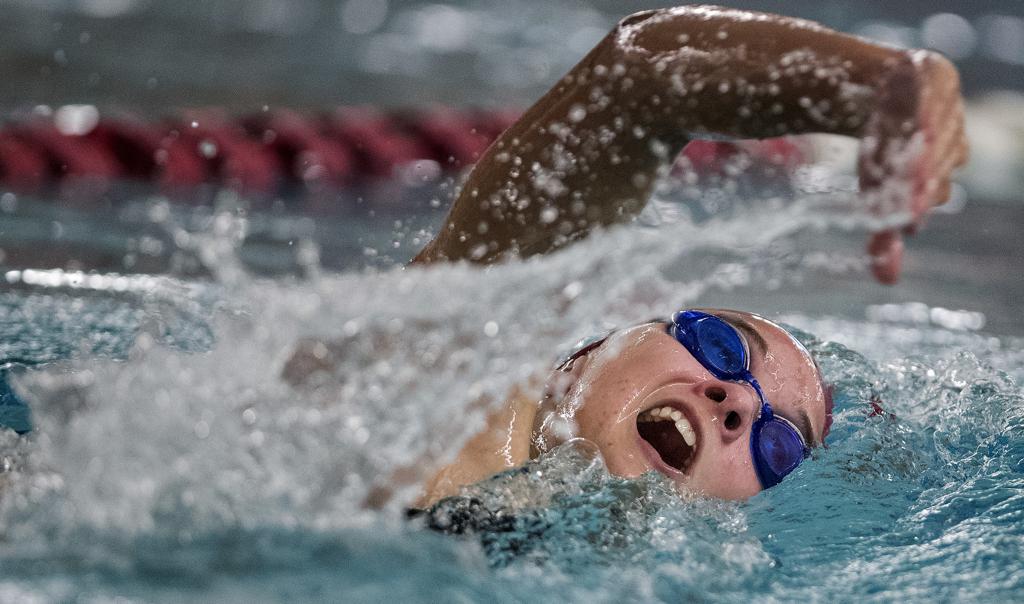 Ryenne Hathaway moves with grace and elegance. It now just happens to be in a pool instead of on the uneven parallel bars.

The Lakeville South senior made a transition from gymnast to swimmer in seventh grade. And now she is thriving in a sport that she had never considered as a middle-schooler.

“I had lost my love for gymnastics,” Hathaway said. “It had become a chore for me to go to practice. It wasn’t fun anymore.”

Her parents were determined not to let her mope around. They required her to find another sport.

It just happened to be in 2012, when the Summer Olympics were being held in London.

“Swimming wasn’t even on my radar until I watched the Olympics that year,” Hathaway said.

“He was super cute, and shared the same name,” Hathaway said. “I had made my decision — swimming!”

Hathaway adjusted quickly to her new sport. She has appeared in four consecutive state meets, serving as a Cougars alternate in her initial season as an eighth-grader.

“It was exciting finding a new sport that I genuinely loved,” Hathaway said. “I was surprised I was able to catch on so quick.”

Gymnastics played a big role in her transition. Hathaway’s favorite event was the vault, but she was at her best on the uneven parallel bars.

“A lot of my success was due to the core strength that I had built up in gymnastics,” Hathaway said.

She had to overcome her previous swimming experience, which came at a young age, when she knew just enough to do the dog paddle and stay afloat.

“I didn’t know how to do any of the strokes,” Hathaway said. “I had to transition quickly.”

That didn’t deter Hathaway, who eventually joined the South Metro Storm swim club and was coached by Phil and Chuck Smith.

“Ryenne’s gymnastics background provided her with fine-tuned kinesthetic understanding, which allowed her to very quickly learn the competitive swimming strokes,” Lakeville South coach Rick Ringeisen said. “Her very first year on the team she made a significant contribution.”

Besides figuring out the strokes, Hathaway also had to learn how to get off the starting block.

“My starts were the worst at first,” Hathaway said. “Now, I need to keep improving my under water.

“The majority of my success can be attributed to Phil and Chuck. They put a lot of heart into me.”

Like top athletes do, Hathaway seeks ways to improve on a daily basis. She owns the third-fastest time in the state in the 50-yard freestyle at 24.03 seconds. She is seventh in the 100 at 53.42.

Hathaway is coming off a second-place finish in the Class 2A state meet in the 50 freestyle (23.24) a year ago.

“Her junior year she, along with her teammates, decided to swim three relays at the state meet,” Ringeisen said. “This decision was made to make it possible for more teammates to finish in the top eight, and thereby earn all-state honors.

“This also made it possible for our team to score more points, and be able to finish as a top-10 team. Doing this meant that Ryenne had to give up the possible glory of finishing in the top eight in two individual events. She had great respect for two senior captains on the team and knew that their best chance to become all-state was swimming on relays.”

Hathaway started to envision a bright swimming future as a sophomore. She qualified for the state meet in four events — 50 freestyle, 100 butterfly and the 200 medley and freestyle relays.

“My dreams and goals are closer to becoming reality,” said Hathaway, who took her first Division I recruiting visit to Arkansas last weekend.

“She is currently being recruited by many colleges across the country,” Ringeisen said. “What makes her such a prized recruit is what college coaches call a ‘major find.’ What that means is that she can swim all four competitive strokes at a championship level.”