Blazers have depth to pursue a fifth consecutive team title. 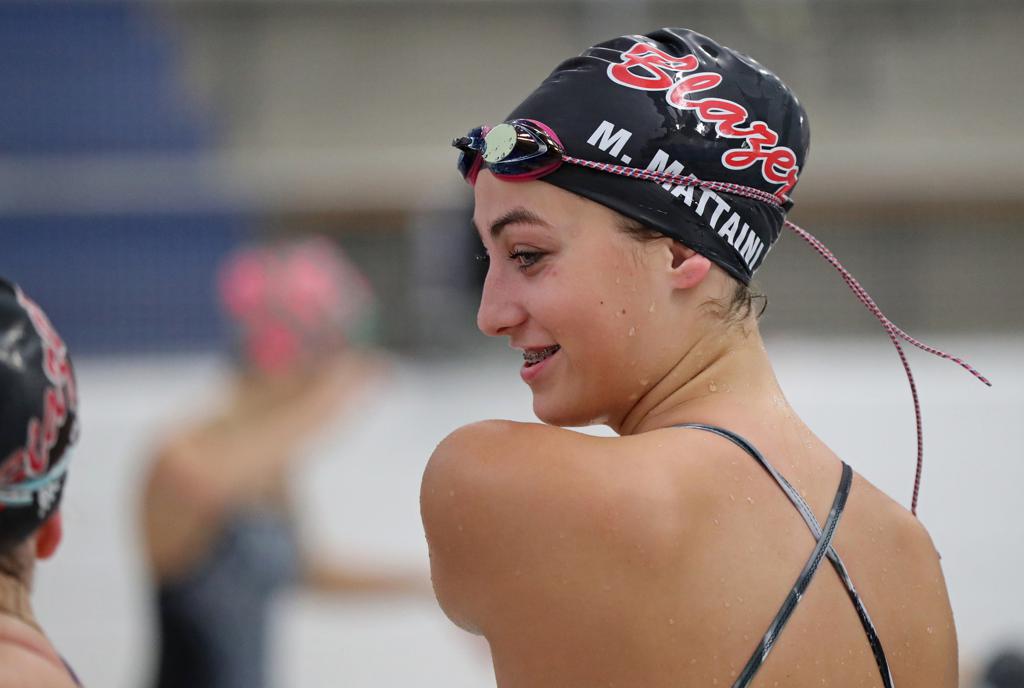 Maria Mattaini stretched out during a practice with the Visitation girls' swimming and diving team.

The Visitation swimming and diving team isn’t overly concerned with rankings. It will excel as a favorite or an underdog.

The Blazers won their fourth consecutive Class 1A girls’ championship a year ago after opening the season ranked No. 4 in the coaches association’s poll.

They opened the 2017 campaign back in all too familiar territory, in the No. 1 position.

“As long as you train hard, work hard and have a positive attitude, goods thing will happen,” said Blazers junior Maria Mattaini, who has been part of the school’s past three state championship squads.

Mattaini quickly attributes the program’s success to its coaching staff. Nate Linscheid is the team’s head coach while Meghan Weiss serves as an assistant coach. Julie Linscheid, Nate’s wife, is the diving coach.

“We get all of our motivation from the coaches,” Mattaini said. “They are the ones that keep us going. They prepare us well, and have faith in all of us.”

Mattaini is the only Blazer returning this season as a defending state champion in an individual event. She won the 500-yard freestyle in 5 minutes, 1.32 seconds.

She also finished fourth in the 200 freestyle and was a member of the runner-up 400 freestyle relay team. Back from that group are junior Sophie Kishish and sophomore Kali Fischer.

“I’m not a sprinter,” Mattaini said. “My endurance is better for longer distances.”

The 200 freestyle relay squad is a defending state champion. Three members of that contingent return in senior Meaghan Sexton and sophomores Ava Hoffman and Frances Holmstadt.

“We’ve got a good team returning from last year even though we lost four all-state swims from two of our seniors,” Nate Linscheid said.

Visitation, a private school in Mendota Heights, will look to offset those losses with its depth. Other key members back from last year’s championship squad include senior Kapani Kirkland, juniors Bella Mascia and Anna Middleton, sophomore Mary Burke and freshman Sophia Mattaini.

“It was really fun to swim with her last year,” Mattaini said about her younger sister, Sophia. “We swam the same event [Sophia finished eighth in the 200 freestyle at the state meet], so I spent a lot more time with her. It was awesome.”

Mattaini acknowledges a big key to success last year and this year lies with the Blazers’ divers. Kirkland finished 10th in the state meet while Mascia also qualified for the event.

“We haven’t had divers before like we do now,” Maria Mattaini said. “It’s fun to watch them, and see them get better every day.”

It also adds to the family environment that surrounds the team.

“We’re super close, and very supportive of each other,” Mattaini said. “It’s very much a family atmosphere.”

So much so that the team has a question of the day, a get-to-know-you type to help younger swimmers feel like they fit in immediately with the veterans. It also has a “secret sister” effort before each meet in which swimmers distribute motivational notes wishing good luck among each other.

“It’s unique,” Mattaini said. “You quickly build relationships between the younger and older swimmers. Some of my best friends I made when I was an eighth-grader.”

Those bonds help explain Visitation’s success in the pool on a yearly basis.

“We have good things built into this team,” Mattaini said. “It’s an amazing thing to be part of.”