Class 1A: Breck/Blake makes a record day of the state meet

The Bearstangs won nine of the 12 events and posted the highest score in state meet history. 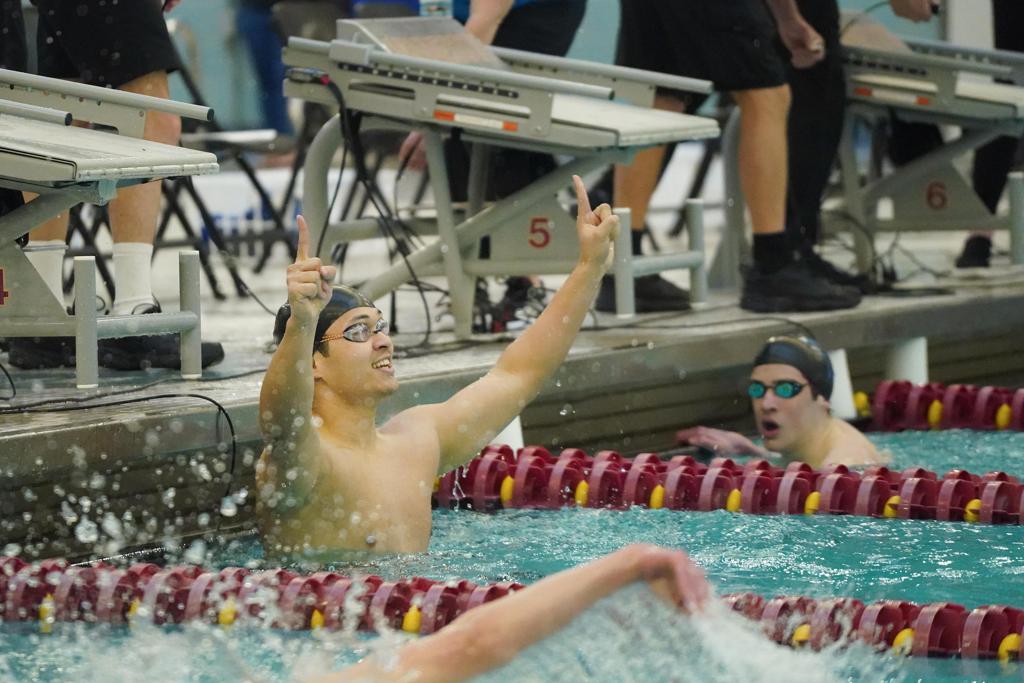 They won nine of 12 events for a whopping 495.5 points, the most for any championship team, and took home their sixth consecutive Class 1A title Saturday at the Jean K. Freeman Aquatic Center on the University of Minnesota campus. Alexandria finished second with 203 points, St. Thomas Academy third with 172.

“We knew we had a shot at a lot of records,” said Breck/Blake co-head coach Michelle Carlson. “But the actual dominance of the meet is unheard of, especially with the times that we got in the relays and individual events.”

The 200 medley relay was a five-peat for Breck/Blake. Senior Charlie Crosby went undefeated in races this season, winning the 50 freestyle and 100 backstroke at state for the third straight year.

Crosby called Breck/Blake probably "the best high school team Minnesota has ever had. And it was just a blessing to be a part of that.”

Breck/Blake senior James Pan defended his titles in the 200 individual medley and 100 breaststroke. He and Crosby also swam on two winning relays.

Breck/Blake finished the meet with another record, 3 minutes, 2.09 seconds in the 400 freestyle relay, about 11 seconds faster than second place and just missing the state record of 3:01.59.

“3:02 I think is already really insane for any high school team,” Pan said. “Even in a club team to compete with. I think it was the perfect note for me and Crosby to go out with.”

Breck/Blake’s previous best mark for team points at state was 423 points in 2019. Either St. Thomas or Breck/Blake has won all Class 1A boys’ state swimming and diving team titles going back to 1999, except for 2004 (Sauk Rapids-Rice) and 2011 (Fergus Falls).

Six consecutive team boys’ swimming and diving state titles is one shy of the record seven in a row won by Rochester from 1953-59.

Simley senior Nico Losinski was the only swimmer to break a record in the Class 1A meet not from the Breck/Blake team. He swam a 4:34.46 in the 500 freestyle, successfully defending his title and breaking the Class 1A record. Losinski said he can usually tell at about the 200 mark how he’s feeling.

“I felt very smooth at the 200, so I knew it was going to be a good swim from there,” Losinski said.

For Hutchinson, sophomore Conner Hogan won the 100 butterfly (50.12), finished second in the 100 backstroke and swam on the fourth-place 200 medley relay and fifth-place 400 freestyle relay teams.

Senior Storm Opdahl made it a three-peat in Class 1A state diving, winning by one point at 478.15 over Monticello senior Dakotah Parker. Opdahl said he knew it would be close coming into the final dives.

“I knew Dakotah had three good dives left, and I knew it was going to take a lot to do it,” Opdahl said. “Just barely edged him out today, so that felt nice.”

Edina wins fourth in a row

The Edina boys’ swim team celebrated its fourth consecutive team title by taking turns with a Sharpie, making checkmarks on the back of their T-shirts next to “check the box.”

“This has been a motto of Mr. Johnson’s as long as I can remember since I was a freshman,” said Edina senior Kai Taft. “Obviously this is one of our biggest goals ever.”

That goal included Edina sweeping all three relays and Taft winning the 200-yard individual medley on the way to a Class 2A team title Saturday at the Jean K. Freeman Aquatic Center on the University of Minnesota campus.

Edina scored points in all 11 swimming events for 355 total points. Eden Prairie finished second with 200 points, and Minnetonka took third with 170 points. Edina is the first Class 2A school to win four straight team titles since Minnetonka did it in the single-class state meet in 1990-93.

“We hadn’t won an [individual or relay] event since 2019,” said Edina coach Scott Johnson. “But this year it’s very special because we’re only the second big-team school to ever win all three relays. Minnetonka did it in 1992.”

“I’ve been working my way up every year,” Taft said, who’s been in the 200 IM state event since he was a freshman. “So to finally get it, it just means so much.”

Rosemount freshman Lucas Gerten trailed heading into his final dive, but his score was just enough to put him in the lead and then win the Class 2A diving state title with a 419.40 score. He narrowly beat St. Paul Highland Park senior Tanner Zeise (418.00), who led headed into the finals and through his second dive on Saturday.