The Skippers dethroned Edina, riding their depth to a runaway victory in the pool. 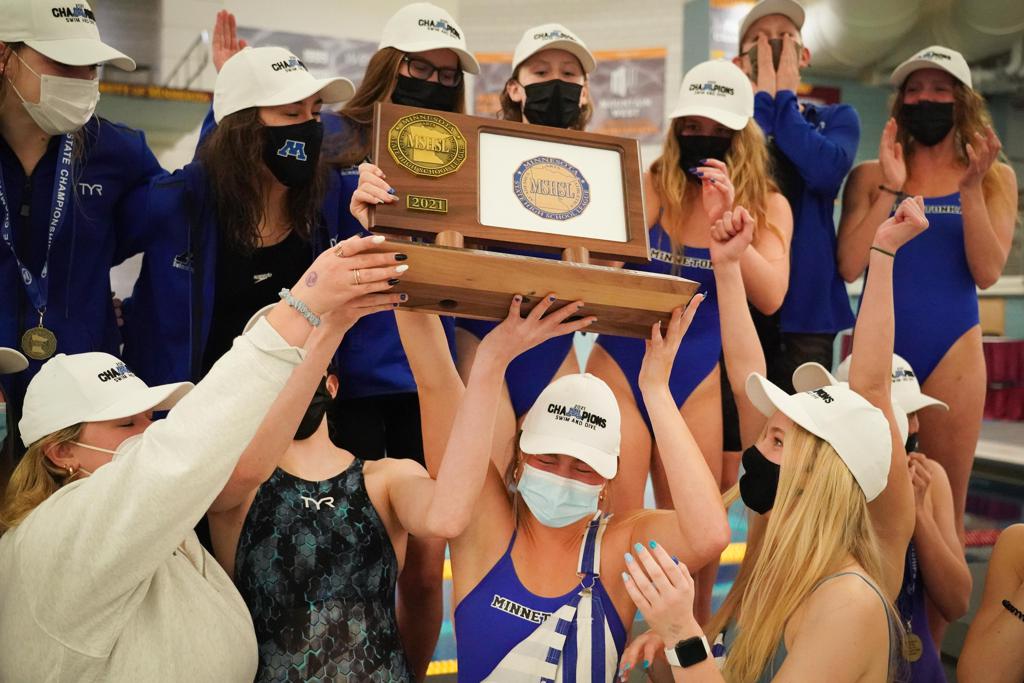 Minnetonka came close to winning a girls’ state swimming and diving title in 2012. But an issue with their relay cards led to the Skippers’ disqualifications from all three relays, which would have given them the Class 2A title.

But everything went according to plan for Minnetonka at Saturday’s Class 2A state meet at the University of Minnesota’s Jean K. Freeman Aquatic Center as the Skippers won their first girls’ swim and dive title since 1976.

“I can guarantee, we went over the relay cards about a dozen times and made sure that was right,” said coach John Bradley, in his first year leading the Skippers.

The team talked about the history of coming close to a title a few years back, said senior Regan Miller. Assistant coach Delaney Ambrosen was a member of that 2012 team.

“I think that gave us more motivation to win it for her, win it for our former coach who’s here,” Miller said. “Just doing it for, not just us, but the people who have helped us get here.”

The Skippers celebrated the 381-point victory with hugs, a few tears and championship baseball caps. They started the evening strong, winning the 200 medley relay in 1:42.97. As their 17 individuals in every event racked up points all night, Minnetonka ended with its only other event victory, in the 400 freestyle relay (3:27.88).

“When you look at the events, we put someone in the top two or three in almost every event, including relays,” Bradley said. “That was incredibly gratifying.”
Finally getting the victory as a team was “surreal,” Miller said, who took second in the 50 freestyle and 100 freestyle events.

“We’ve been dreaming about this for four years now,” Miller said.

Four-time defending champion Edina finished second with 223 points, while Stillwater took third with a score of 176.

Junior Haley Zelen won the first state title in program history for Shakopee, taking first in the 100 freestyle in 50.54. She said she was extremely nervous coming into the event but glad that her hard work paid off.

“I touched the wall, and I peeked over a little bit and I noticed I was there first,” Zelen said. “Extremely happy with how it went.”

Zelen also took seventh in the 200 freestyle and swam on the second-place 400 freestyle relay team and the medley relay.

Caroline Larsen swam on two Eden Prairie relay teams and took home two individual titles in her first state meet. She won the 50 freestyle in 22.66 before taking the 100 breaststroke title (1:01.35). While Larsen said she’s extremely competitive and doesn’t like to lose, winning wasn’t necessarily the focus.

“I was more worried about having fun and doing my best and getting best times than winning,” Larsen said. “Because if you worry too much about it, you’ll overthink it.”

Andover freshman Grace Rabb captured her first two state titles as well, in the 200 individual medley (2:01.79) and 100 backstroke. The results were much improved from her first state meet two years ago as a seventh-grader, when she took ninth in the 100 back at state and was disqualified from the IM at the section meet.

“I was hoping to swim my best, and I knew if I gave it everything I got and I performed well on the splits I needed to that I would achieve my goals and my times,” Rabb said.