Swimming season tested Edina’s Keegan Duffy, even before the pandemic

The standout proved his determination over the past two years after suffering a back injury while strength training over the summer. 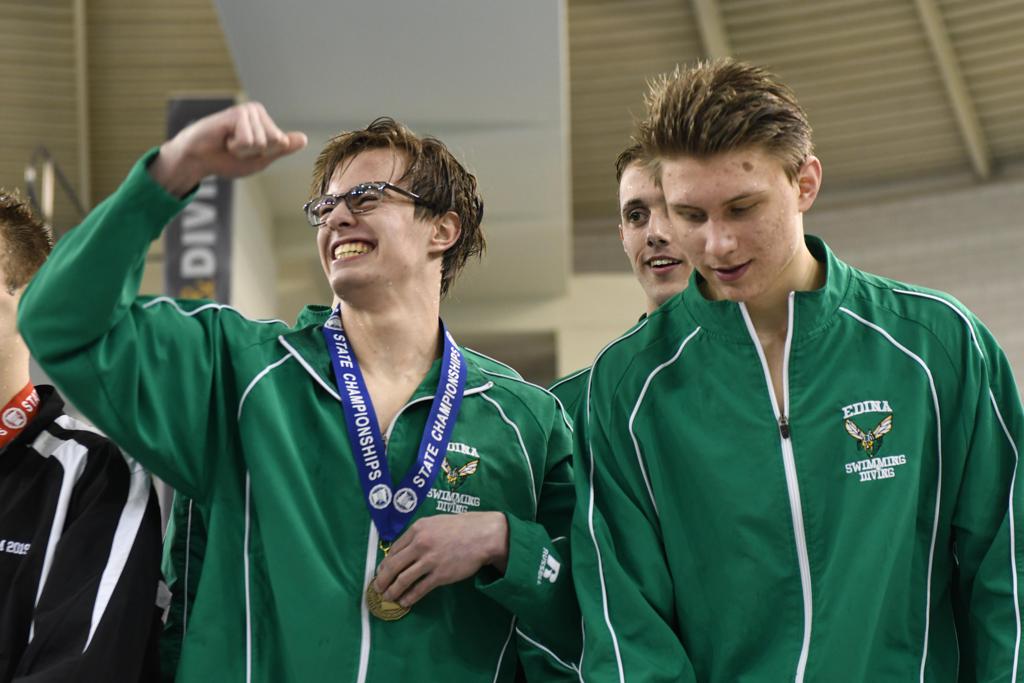 Keegan Duffy, left, was part of a relay team championship for Edina at the 2019 boys’ swimming state meet, and is trying to build his strength for another run with the Hornets. Photo by Courtney Deutz • Star Tribune

Delays to the winter sports season because of  the COVID-19 pandemic aren’t about to deter Edina senior Keegan Duffy. He knows how to battle through uncertainty.

The boys’ swimming standout proved that over the past two years after suffering a back injury while strength training over the summer. Coming off a standout sophomore season, he herniated a disk between the fourth and fifth lumbar vertebrae.

It reached heightened frustration when Duffy, a drummer in Edina’s marching band, was on a holiday trip to Orlando. On the third day of a venture to one of the theme parks, Duffy couldn’t walk anymore because of the pain. He needed to be pushed around in a wheelchair the entire day.

“It was difficult not being able to do the things I love to do,” Duffy said.

At the time of the injury, Duffy thought he was just starting to peak as a swimmer. He finished fourth at the state meet as a sophomore in the 200-yard individual medley, sixth in the 100 backstroke and swam the third leg on the winning 400 freestyle relay team.

The Eagle Scout credits Twin Cities Orthopedics for helping him return to the pool.

“I met some very special people — doctors, physical therapists and chiropractors — in my life that helped lift me up when I was at my lowest point,” Duffy said.

After being sidelined for nearly six months, Duffy got back in the pool last January. He couldn’t do the butterfly or breaststroke because of his injury. Instead, Duffy helped Edina successfully defend its Class 2A team championship by advancing to the state meet in the 50 freestyle, 100 backstroke and as a member of the 200 medley relay team.

In preparation for this season, Duffy has been doing dryland workouts four days a week and riding a stationary bike (for cardio and leg strength) the other three days. Entering Monday, he hadn’t been in a pool since Nov. 20, when Gov. Tim Walz issued his initial executive order pertaining to winter sports this school year.

“I try to better myself each and every day,” Duffy said. “I’m a competitor at heart.”

After the girls’ swimming and diving state meet was canceled this past fall, Duffy hopes the boys’ meet can proceed as planned.

“What they did to the girls was unfair,” Duffy said. “I would love the opportunity to compete at the state meet one more time.

“I want to compete at my highest level this season to show people that my injury didn’t take me down. I’m back, healthy, stronger and hungrier than ever to succeed again.”