Butterfly champ Peyton D'Emanuele hopes to dance like a double-winner

The Notre Dame-bound swimmer from Minneapolis Southwest is seeking to repeat in the Class 2A 100-yard butterfly champion and will race in the 50 freestyle as well. 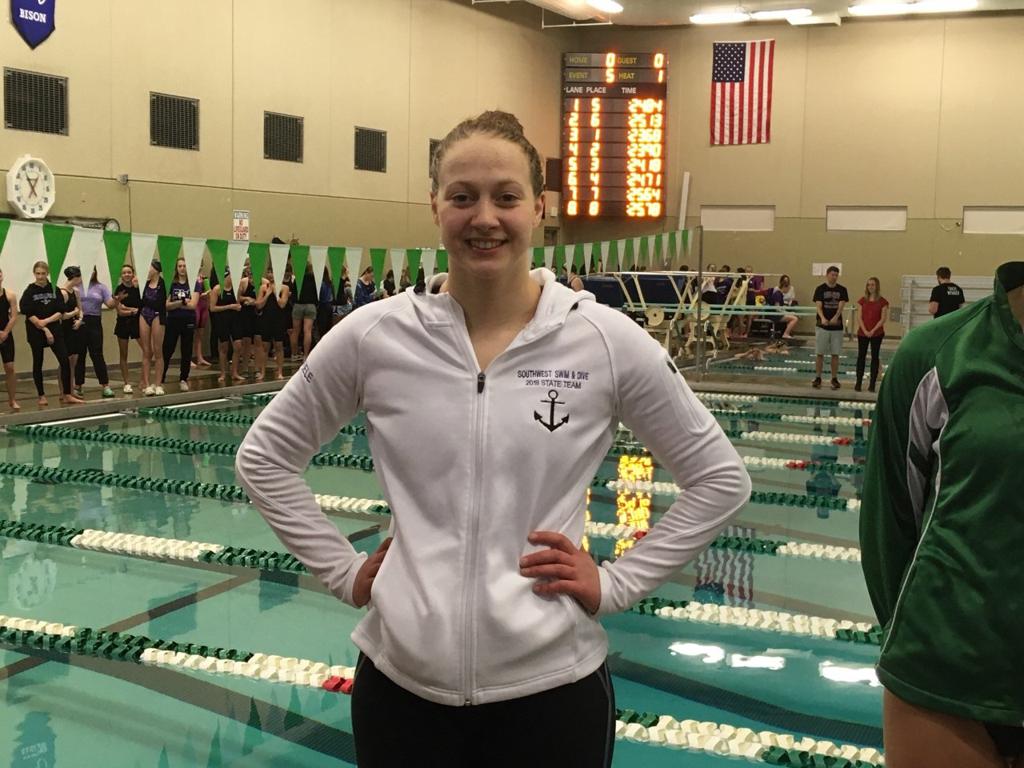 Peyton D’Emanuele of Minneapolis Southwest will be trying to defend her 100-yard butterfly title in the Class 2A girls’ swimming and diving state meet, which begins Thursday. Submitted photo

Minneapolis Southwest senior Peyton D’Emanuele doesn’t mind being a dancing fool. She just hasn’t demonstrated any of her favorite steps or routines after winning a race. Could that all change during her final high school meet?

“I’m too tired after a race. I wish I could let loose a little more, but I’m too focused on my swimming,” D’Emanuele said. “Plus, I like to think I’m a lot better dancer than I really am.”

D’Emanuele won’t get any argument when it comes to the state’s best in the 100-yard butterfly. She will look to successfully defend her Class 2A title in the event at the girls’ swimming and diving state meet this week.

The meet begins Thursday with diving preliminaries at the Jean K. Freeman Aquatic Center on the University of Minnesota campus. The swimming preliminaries will be held Friday, with all finals in Class 2A and 1A set for Saturday.

“Not often do you get an athlete with her ability, and also have a humble spirit,” Minneapolis Southwest coach Chris Aarseth said. “She has been special for us.”

D’Emanuele, who has committed to Notre Dame, won the 100 butterfly with a time of 54.45 seconds a year ago. It was the sixth fastest time in state meet history and more than a second faster than her runner-up time of 55.53 in 2017.

“That was very rewarding and satisfying,” D’Emanuele said.

It offset her disappointment of not participating in the 50 freestyle. She was disqualified in the event at the Section 6 meet.

“I was really disappointed in that happening,” D’Emanuele said.

D’Emanuele has a chance to make amends in the event this weekend. She won the section title with a personal-best time of 23.68, defeating Edina’s Lily Gremmels and Nora Clarkowski, who finished one-two in the state meet a year ago. Gremmels was the medalist with a time of 23.66.

“I had something to prove to myself,” said D’Emanuele, who finished 10th in the event as a sophomore. “One little mistake in that event and you’re done.”

She has nothing more to prove to Aarseth.

“Peyton is one of the most impressive young women I know. It is rare to find a teenager with such internal drive and motivation,” Aarseth said. “Her career can be summed up in one word, astounding.”

As well as her dancing.

“I like alternative, hip-hop, rap,” said D’Emanuele, who has made TikTok videos, led the team at the homecoming parade doing the “Git Up Dance” and mastered the Arm Wave. “Now I’m starting to think that I’m a country girl at heart.”

Visitation has its sights set on a seventh consecutive Class 1A championship while Edina is looking for its fourth Class 2A crown in a row. Schools from the Lake Conference have claimed the top two spots in the last nine Class 2A meets.

Both teams have Gopher recruits in Ava Hoffman of Visitation and Megan Phillip of Edina. Phillip is looking to become only the second diver in Minnesota history to win four state titles.

The Hornets are led by junior Claudia Chang. She won the 200 and 500 freestyles and swam a leg on the Hornets’ victorious 200 and 400 freestyle relay teams a year ago.

Benilde-St. Margaret’s junior Taylor Williams is the lone individual event double winner returning in Class 1A. She won the 100 and 200 freestyle a year ago.