The senior, whose parents and two older brothers are divers, has her sights set on becoming the second diver in Minnesota history to win four state titles. 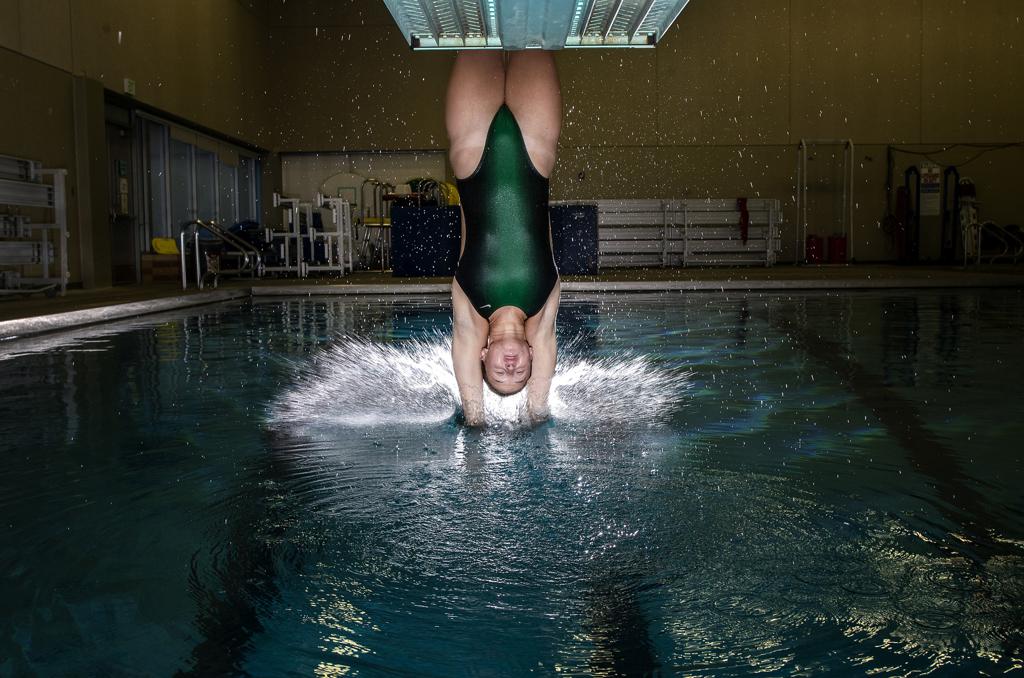 Edina diver Megan Phillip is competitive, confident and hard working. The senior has kinesthetic intelligence and possesses physical and mental strength while having fun in the process. All traits of an outstanding diver.

Her parents, father Doug and mother Helen, were collegiate divers. Doug competed at Auburn while Helen was at Clarion in Pennsylvania.

Her older brothers, Matthew and Ryan, followed suit. Matthew just completed his college career at LSU while Ryan is in his sophomore season with the Gophers. Megan is in the process of selecting her college choice. Her list of six schools includes Minnesota.

“When they were young, I wanted them to do something they were going to love to do,” Helen said. “I never expected them to be diving.”

Parents Doug and Helen Phillip with two of their children, Ryan and Megan. The Phillips are all divers.

The Phillip family moved to Minnesota from Frisco, Texas, when Doug was transferred for work prior to Megan’s freshman year. Ryan began his junior year at Edina while Matthew was already at LSU. 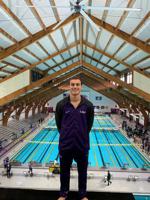 Oldest sibling Matthew, who competed as a diver at LSU. (submitted photo)

“I was excited to move,” Megan said. “It was going to be a new experience.”

A transition that was made easy thanks to her new Hornet teammates. They and Megan have won three consecutive Class 2A team state championships, which rank higher for her than any personal accolades.

“Our move has been a really cool experience,” she said. “I was just a new face in the group. I got great support from the entire team.”

It meant more of a change for Ryan, who was a diver when he was younger before turning to swimming. Once in Minnesota, he decided to return to diving, a change that “was a surprise to us,” Doug said. “It came as a complete shock to his mother.”

It paid off. Ryan and Megan own the Edina pool records for six and 11 dives at the Art Downey Aquatic Center at South View Middle School.

Their oldest brother Matthew, in his senior year at Liberty (Texas) High School, set the school, Texas Interscholastic Swim Coaches Association, district and regional records on his way to the state championship.

“It shows we are accomplished,” Ryan said.

This season Megan is looking to become only the second diver in Minnesota history to become a four-time state champion. Jaime Sanger of Wayzata accomplished the feat from 1995-98.

“Megan is very driven, and a tenacious competitor,” Edina diving coach John Dailey said. “She is internally motivated and tremendously focused at all times.”

Last season, Megan turned in a record-setting performance of 517 points en route to her third consecutive Class 2A title. It was 10 points better than the previous state meet record, set by Sanger in 1997. Sanger went on to Tennessee where she became an All-American.

“There is an elite handful of divers in state history,” said Dailey, mentioning the likes of Chris Curry Whritenour, a former Gopher and AIAW (Association for Intercollegiate Athletics for Women) national champion who attended now-closed Minneapolis West High School. “Megan would be in that group.”

The price you pay

Megan’s accomplishment a year ago was achieved while competing in the state meet with a broken right ankle.

“There were times when I didn’t know if I was going to be able to finish out the season,” Megan said. “It was a struggle.”

She had surgery five days after the state meet. A month ago, Megan had the pin removed in her ankle and is currently trying to get back to 100 percent.

“It feels amazing, like a normal foot again,” said Megan, who suffered a high ankle sprain on the same foot when she fell off a dry board her sophomore season. “There are times where it will swell up when I’m diving, but it doesn’t hurt.”

Her brothers also know the toll the sport takes on the body. Matthew has dealt with a broken leg and elbow while Ryan has suffered a broken hand and concussion.

“Every day is different. You have no idea what’s going to happen,” Ryan said. “That’s part of the fun of the sport. It keeps the adrenaline high.”

Megan took to the water at a young age. She knew how to swim at 18 months and started diving when she was 10 years old.

“We are a family that likes to take risks, push our limits,” Megan said. “We love being in control of ourselves in the air.”

That mentality was launched by Matthew. “It all started with the oldest one,” Helen said.

“I didn’t think any of them were very coordinated when they started,” she said, laughing.

Megan won the 10- to 11-year-old age bracket at nationals her initial year of competing.

“We’re a very competitive family,” Megan said. “It’s a sport where you have to trust yourself.”

The trio competed in numerous state, regional and national events at the same time. It usually wound up in a family vacation.

“We made it a point for them to have fun,” Doug said. “We didn’t want it to be just about the stress of big competition.”

Megan is in the process of taking her official college visits. Her list is down to Auburn, Kentucky, LSU, Ohio State, Texas and the Gophers.

To excel at the next level, Phillip said, “I have to work on my form and technique. I have the physical strength, but not the technical part of it so my dives really come together.”

She plans to major in pre-med and pursue a minor in business. Matthew is a kinesiology major while Ryan is majoring in business.

“I’m more proud of them not because of the results, but how they’ve gone about doing it,” Doug said. “They’re chasing what they want, and succeeding doing it.”

That mind-set has Megan pursuing one more goal: Making the U.S. Olympic trials and becoming a future Olympian.

“Any ones chances of being an Olympian are pretty slim,” Dailey said. “Megan is one I would never bet against. She has the talent and desire. She is phenomenal.”

Edina senior Megan Phillip is the Class 2A three-time diving state champion. She turned in a state meet record 517-point performance last season while competing with a broken right ankle. Phillip says she has at least a little bit of something in her from her parents and two brothers, all competitive divers.

Doug, father: “I’m a lot like my dad. It’s his mental toughness. He is never scared of anything. I try to do what he would do. He always has a strong mental approach.”

Helen, mother: “Also mentally tough. She is really strong. She taught herself how to dive. She has told me: ‘Just because you don’t have something doesn’t mean you can’t do it yourself.’ ”

Matthew, brother: “Oh, I’m not on his level at all. He’s crazy! I will always have fun like him though.”

Ryan, brother: “I’ve always been closest to Ryan because of how close we are in age. We have always pushed each other to be at our best, and continue to get better.”