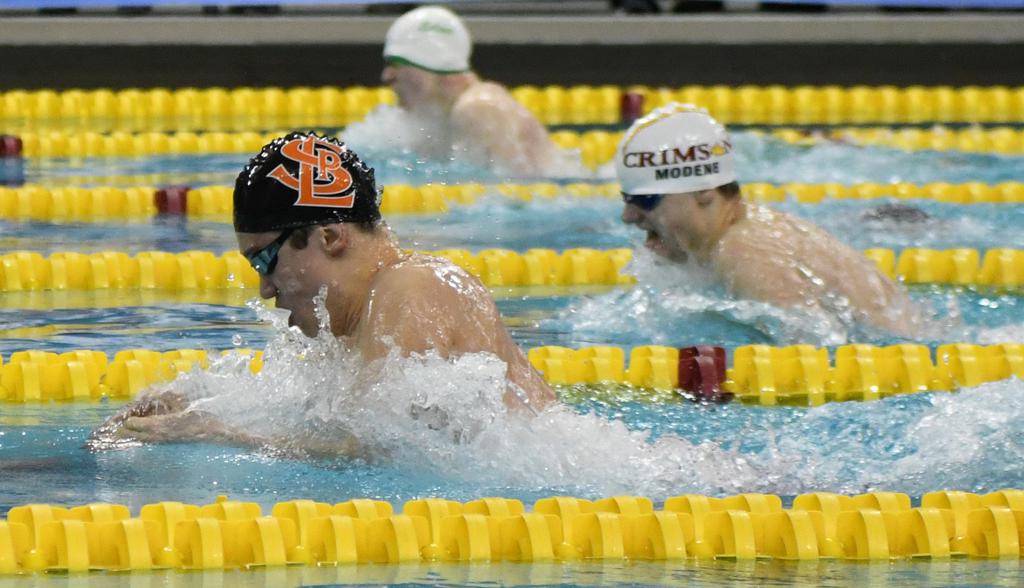 Anderson Breazeale’s attention to detail was rewarded on Friday.

The Breck/Blake senior was a part of two Class 1A state records at the boys’ swimming and diving preliminaries at the Jean K. Freeman Aquatic Center.

Breazeale set a record in the 100-yard backstroke (48.57 seconds) as he goes for his second consecutive title in that event. He also teamed with James Pan, Spencer Pruett and Dylan Brown to set a record of 1:32.43 in 200 medley relay as Breck/Blake got off to a good start in its bid for a third consecutive state title.

“I was focused on the backstroke,” Breazeale said. “It’s been a lot of hard work, but our atmosphere at practice and our coaches really help. Our coaches have stayed after practice to help me. My teammates watch my underwaters and my stroke. It helps everybody be better.”

Breazeale didn’t compete in the 50 freestyle at last year’s state meet. He finished second in the 200 individual medley last year.

“[Because of] a hip injury, I can’t breaststroke,” Breazeale said. “and I’m not very good at it so I decided to try out the 50 freestyle.”

“They work hard and push their teammates,” said Breck/Blake co-coach Brian Wright. “We have seven seniors who all work so well together.”

Minnehaha Academy junior Andrew Karpenko set a Class 1A record in the 200 individual medley with a time of 1:49.02. Karpenko, the defending state champion in the 200 IM, also set a state meet record in the 100 breaststroke. His time of 54:49 seconds broke the record of 54.75 set by Breck/Blake’s Humphrey Pruett in 2015.

Edina senior Peter Larson and Lakeville North senior Andrew Trepanier put on a dazzling display in the Class 2A preliminaries.

In the 50 freestyle, Trepanier won his heat in a state meet record of 20.12. Moments later, in the next heat, Larson bettered that with a 19.97.

“I’m super excited to race tomorrow,” said Trepanier, the defending state champion. “It’s my senior year. There’s nothing much you can do but give it your best shot. It will be a fun day.”

Trepanier, who also won the 100 freestyle at last year’s meet, also had the top qualifying time in the 100 butterfly, at 48.49 seconds. The state meet record in the event is 48.20.

Larson also broke the state record in the 100 freestyle, finishing in 43.46.

Despite having its 200 medley relay disqualified, Edina had a strong showing in the preliminaries in its bid for its first Class 2A state title since 2010.

Larson also teamed with Jacob Biscan, Max Dow and Charlie Webb for the top qualifying time (1:24.32) in the 200 freestyle relay. Gray teamed with with Webb, Liam DeMuth and Keegan Duffy for the second-best time (3:06.68) in the 400 free relay.

In the diving preliminaries on Thursday, Stillwater junior Josiah Fick had the top score in Class 2A with a 276.95. St. Michael-Albertville sophomore Tyler Barrett was second with 269.05.